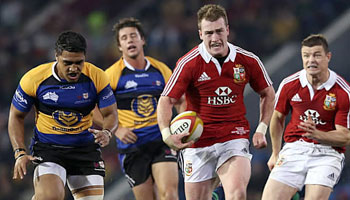 The Lions scored ten tries on their way to beating a Combind Country midweek team 64-0 in Newcastle on Tuesday. The home side were totally overwhelmed early on, but put up a good fight in the second half, with Lions inaccuracy frustrating Brian O’Driscoll.

In the first half the Lions were beating the clock for the most part, scoring a point a minute on their way to what looked to be the first 100 pointer of the tour. In the second half errors crept in though as the Combined Country side never gave up and conceded just four tries.

“We probably got a little bit flat, and the accuracy of some of the passing suffered,” said O’Driscoll. “Balls were thrown behind when a little bit of depth might have made things an awful lot easier.”

The damage was already done though, as the Lions scored six slick tries in the first half, before adding four more in the second, and opting to bring on a number of replacements.

“It’s a lot of use. The team only had one training session together. There was some excellent stuff and some average stuff as well,” said Lions coach Warren Gatland.

He was full of praise for young Stuart Hogg, who played flyhalf for the first time in years.

“I thought he played very well. I was very pleased with his performance. He kicked and ran well, played nice and flat. It was a really good performance from him.”

Combined Country coach Cameron Blades was very impressed with the Lions but said that he feels the Wallabies will be able to negate their attacking threat.

“We showed in the second half that if you get in their faces, they can make some errors,” he said.

“If you can cut down their time to work with, there is turnover ball to be had. But they are a slick outfit and it is going to be a cracking series.”