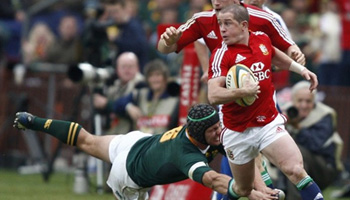 The British & Irish Lions have ended their 2009 tour of South Africa on a high after convincingly beating the Springboks 28-9 at Ellis Park in the third and final Test.

While the Springboks celebrated winning the series with their dramatic win at Loftus Versfeld last weekend, they treated the third Test as an opportunity to try out different combinations ahead of the Tri Nations. Ten changes were made, and it showed.

The Lions on the other hand made seven changes, many of which were forced by injury. It didn’t affect them though as they came out firing with high intensity levels that the Boks struggled to compete with.

Shane Williams broke his drought as he scored two tries that both came from brilliant individual touches, from Jamie Heaslip and Riki Flutey respectively. Ugo Monye scored the Lions third try with an intercept as the Boks went searching for points.

“It’s a satisfaction but a secondary satisfaction because we came here to win the series. It will be my last Lions involvement. I’d like to thank the players, they’ve been outstanding to a man,” said Lions coach Ian McGeechan.

Springbok captain John Smit said: “We had a wonderful series but would have loved to complete a whitewash so we’re disappointed. We just were not in the right frame of mind. The Lions wanted a victory and they succeeded.”

“But if you had to said to me the series would have been 2-1 beforehand, I would have taken it. The Lions series was always going to be our priority this year and its been an amazing experience. To win a series, for me, is right up there with the World Cup.”

The Springboks took to the field with white armbands that had the word ‘Justice’ on them as a protest over the two week suspension of Bakkies Botha for a charge into a ruck last weekend.

“The Springbok players all feel for Bakkies as he will miss this memorable final test against the British and Irish Lions,” Heymans wrote on the SARPA website.

“Over an extended period of time numerous other players have charged into rucks without binding but were either not penalized at all or received only a penalty. Bakkies hit a ruck just before this one in question in a similar style and was not penalized. Coaches are coaching players to hit rucks in this manner and therefore this is a major cause of apprehension.”

Lions forwards coach Warren Gatland agreed. We thought it was a tough decision, we had no issue with Bakkies. He has a history in the past of not using his arms, but on this occasion there was no problem.