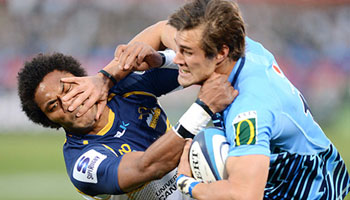 Brumbies coach Jake White says that the Bulls’ decisions to turn down three kicks at goal heavily played in his teams favour during the dramatic second Super Rugby Semi Final on Saturday. The Brumbies won the game 26-23 after snatching a late try.

The Bulls could have extended their lead on more than one occasion in the final ten minutes, but instead opted to go for lineouts, much to the dismay of the local fans at Loftus Versfeld.

“The players said they grew a bit of a leg on the basis that they weren’t going for poles, it almost I suppose helped us a bit because we kept saying: ‘They are leaving the door open’,” Brumbies coach White said post match.

“I don’t know what the reason for that was, considering that they took Ralepelle off and they had a new hooker, and then you have the best goal kicker in the competition (Morne Steyn) on the field.”

The Bulls failed to score tries on all three occasions, but coach Frans Ludeke, who was clearly unhappy with the decisions at the time, has said that captain Dewald Potgieter’s thinking was that keeping them down in that half was safest. In the end, it backfired anyway.

“He felt like keeping them down there and if you look at the whole evening getting out of our half – we weren’t on top of that area of our game,” Ludeke said. “His feeling was to keep them down there and the pressure is on them as they can’t get out of their half.”

In the end, with a minute to spare, Tevita Kuridrani snatched a try and gave the Brumbies a place in the final, where they will face the Chiefs in Hamilton next weekend.

“The most important thing is just mentally and physically recovering as quick as possible,” said White. “It will be about believing it’s going to happen and believing the things we’ve practised for the past two seasons is enough. We’ve just got to believe and get it right.”