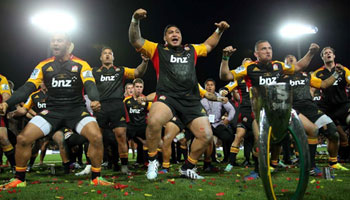 One of the lasting memories from last year’s Super Rugby final was when the Chiefs celebrated with a unique Haka, paying tribute to the fans after they beat the Sharks to take their first ever title. On Saturday they did it again, and it was just as moving.

As with last year, they laid down the trophy and let rip, along with Maori warriors on either side, as they celebrated their second successive title victory. Led by Hika Elliot, it was spine-tingling stuff, and it yet again showed what a tight knit unit this Chiefs outfit is.

Family is an integral part of their success, as could be seen after the final whistle when the majority of players were seen with their children and loved ones on the field.

Liam Messam said that it is their way of thanking the fans, friends and family. “It’s part of our culture and who we are as a team. It’s just pretty much giving thanks to our friends and family, they sit in front of us, so, just all the sacrifices they’ve done for us over the years.. That’s for them”

Injured players, such as Richard Kahui and Mo Schwalger – crutches and all – even joined in.

“You can see the emotion there of eight months of hard work in that Haka. Very proud moment for them,” said former All Black lock Ian Jones.

Big Ben Tameifuna, who had another good game, was a prominent figure at the front of the pack.

“I had my family right there in the front row, so it’s for them. It’s for them, thanking them for the support the whole season and hopefully they’ll turn up next season and do it again,” he said.