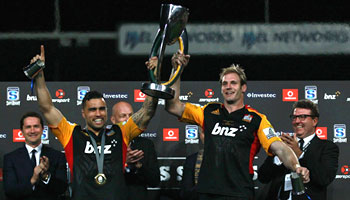 The Chiefs successfully defended their Super Rugby title by beating the Brumbies 27-22 in an exciting final in Hamilton on Saturday night. They become one of just a handful of teams that have won the tournament back-to-back.

The Chiefs came from 10 points down to turn things around in the second half and join the likes of the Auckland Blues, Crusaders and Bulls in becoming just the fourth team to defend their title.

Two quick tries and a penalty in a short period of time fired the hosts into the lead, despite the visitors at one stage looking in control and on the way to their first title since 2004. The Chiefs then withheld a late onslaught to take the win.

“I don’t care to be honest. It’s more about what happens within our group and we’re really satisfied,” he said. “It’s a tough tournament. You’ve got to be good and consistent for long periods and that gave us the opportunity to play at home and that probably made a difference.

“Dynasty is the sort of thing you reflect back on. We’ve won a couple of titles and next year it will be about realising how hard we’ve had to work to achieve what we have done and trying to replicate that.”

Sticking to an attacking gameplan, the Chiefs played attractive rugby and ended the tournament with more points and tries than any other side.

“They showed why they are a championship team,” said disappointed Brumbies coach Jake White.

Extended highlights of the match are below, with more to come shortly