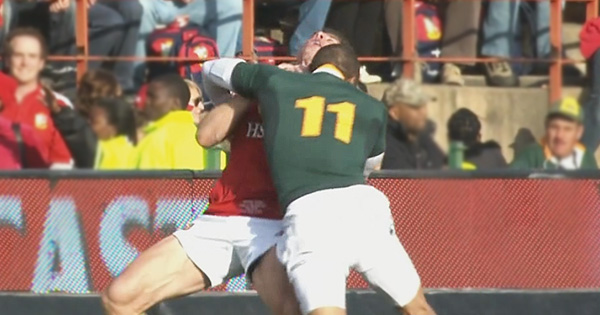 Bryan Habana was in the news yesterday as he has been called up to join the Springbok 7s team as they prepare for the next two rounds of the World Sevens Series. Here is a clip of him in action against the British & Irish Lions in 2009, with one of the hits of the series.

Habana is another in a line of high profile fifteens stars to have switched over to 7s ahead of the 2016 Olympics in Rio. Sonny Bill Williams has made the change, and Quade Cooper will also be taking part in the next round in Las Vegas, in two weeks time.

World Cup winner Habana scored a try for French club Toulon on the weekend, but they have agreed to release him to join the Springbok Sevens squad in Stellenbosch.

Do you think Habana will do well in Sevens?

Above is that hit from 2009, and on the next page (or below) you can see an interview with coach Neil Powell, as well as read some of Habana’s achievements in rugby.

“Bryan is an unbelievable rugby player and his outstanding playing record and achievements in the Springbok jersey speaks for itself,” said Powell. “I am really excited by the prospects of him joining our training squad.

“Bryan is one of those players that always has a lot of energy. Apart from that, he brings with him a lot of experience of playing rugby at the very top level, so in that sense his presence in the squad will also be a great motivational factor for our guys.

“I can tell you Bryan is very eager to learn. He realises that it’s been a very long time since he last played Sevens, but he is excited by this challenge and really looking forward to be part of our system.”