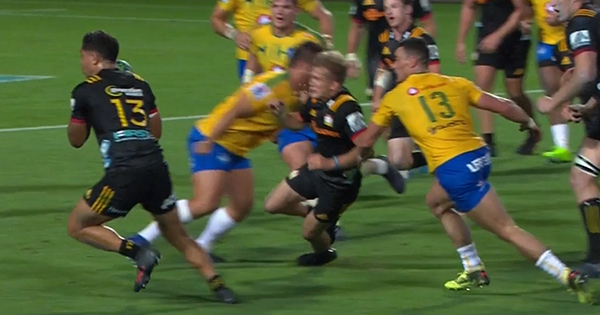 Bulls prop Conraad van Vuuren narrowly avoided a red card when the Chiefs and the Bulls met in Hamilton in the opening game of round 5 of Super Rugby. The Bulls led for large parts but the wheels came off in the second half, as the Chiefs picked up a 41-28 win at home.

With just 13 minutes left and scores evenly poised at 29-28 to the hosts, replacement prop Van Vuuren made this late tackle on Damian McKenzie, nearly knocking his head off in the process.

McKenzie was sliding down so the contact was minimal, but because of his body position, the prop’s swinging arm was too close to the playmaker’s head for the referee’s liking.

If McKenzie were standing upright, height wouldn’t be an issue but perhaps more significantly, the tackle was very late so all factors considered, it looked very dangerous.

Referee Shuhei Kubo was set on a red card after TMO Shane McDermott drew his attention to the tackle but was then talked down by McDermott, who made mention of McKenzie slipping into the tackle.

Former Test referee Jonathan Kaplan aired his views during the match, stating that a yellow card was well deserved but it definitely could have been a red card.

“No complaints there at all.. Lucky not to get Red! Lucky. The fact that he slipped only saved carrier from more damage! And how late was that !?!?“

Whether McKenzie ducked intentionally or not, he was very fortunate to not be injured.

With just over ten minutes left in the match, Van Vuuren might as well have been red carded, as momentum was with the Chiefs against 14 men, and they scored two late tries for the win.

The SANZAAR Foul Play Review Committee then accepted a guilty plea from Van Vuuren, who was later suspended for 3 weeks.

“However, taking into account mitigating factors including the Player’s youth, his clean Judicial record and his guilty plea at the earliest possible opportunity, the Foul Play Review Committee reduced the suspension to 3 weeks.”

Both teams scored excellent tries, including a scorcher from brilliant lock Brodie Retallick.