CATCHUP: Twists and turns on opening day of U20 World Championship 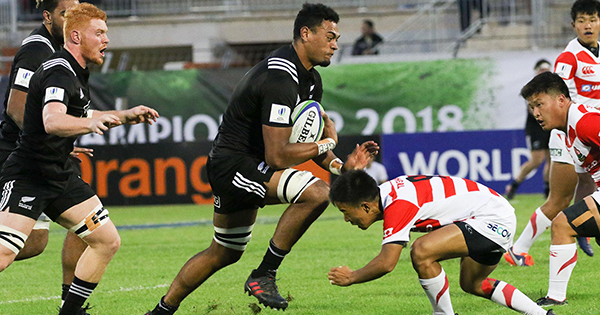 The 2018 U20 World Championship kicked off in France on Wednesday evening, with six matches taking place and defending champions New Zealand racking up the highest score of the day. There were also one or two upsets. Catch up on all the highlights below.

New Zealand kicked off the defence of their World Rugby U20 Championship title with a ruthless 67-0 defeat of Japan on a day of twists and turns in France on Wednesday.

The 2018 edition of the premier age-grade tournament is predicted to be the most competitive yet and the opening day lived up to that expectation with four matches decided by less than seven points.

South Africa were forced to dig deep to edge past an impressive Georgia 33-27 before hosts France came from 12 points down to beat Ireland 26-24 in the other Pool C match in Perpignan.

The two matches in Béziers were equally tight affairs. First Italy capitalised on a late Scotland yellow card to snatch a 27-26 victory thanks to Niccolo Taddia’s try at the death, before Wales avenged their 2017 loss to Australia with a 26-21 victory.

England, the 2017 runners-up, had to withstand a strong first-half performance by Argentina in the first match in Narbonne before coming through to win 39-18.

New Zealand will tackle Wales before France face Georgia in Béziers, while Australia meet Japan and South Africa go head to head with Ireland in Narbonne. The four Pool B teams are in Perpignan with England facing Italy and Scotland taking on Argentina.

South Africa U20 v Georgia U20

England U20 v Argentina U20