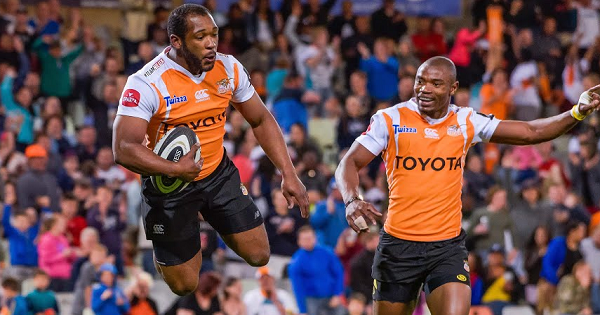 The Cheetahs overturned an 11 point deficit to record their first ever Guinness PRO14 victory by beating Zebre 54-39 in Bloemfontein. It is the first season that sees two South African sides taking part in the previously northern hemisphere only competition.

While much had been made of the embarrassingly low spectator turn-out for the other match taking place in South Africa – Southern Kings’ encounter with Leinster at Nelson Mandela Bay Stadium – this match attracted a far more promising attendance of 13,982.

The contest matched the interest and produced an action-packed encounter which allowed both sides to secure bonus points.

Zebre began in the best possible fashion by building a good lead through George Biagi’s try. Biagi was later sin-binned as the home side fought back to take a 19-11 half-time break.

Both defences were fairly brittle at times but that didn’t take away from the spectacle. There were tries galore, with the Cheetahs bagging eight versus Zebre’s five.

Makazole Mapimpi, Luther Obi and William Small-Smith each scored before the break in a match which more resembled a Super Rugby style of play than that usually seen in PRO14.

The victory for the Cheetahs moved the South African side up to fifth in Conference A, after suffering heavy defeats to Ulster (42-19) and Munster (51-18) in the opening two rounds.

The Cheetahs stay at home this weekend to face Leinster, who will finish their South African tour off for the year after they comfortably beat the Southern Kings 31-10 in Port Elizabeth.