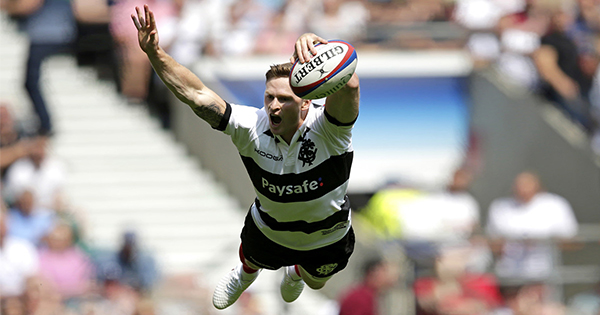 The Barbarians ran riot against England on Sunday, with Chris Ashton scoring a first-half hat-trick and the Fijian pair of Semi Radraga and Josua Tuisova causing real problems in the 63-45 rout. Eddie Jones insisted post match that it was a good experience for his youngsters.

Toulon winger Ashton crossed for his first try within minutes of kick-off, celebrating with the customary Ash Splash in front of his home crowd.

He went on to score two more tries, the one a beautifully executed chip-kick and gather, making a statement in front of England coach Jones with a hat-trick within twenty five minutes.

Playing for Toulon, he is of course ineligible to be selected for England but it’s no secret that he would still love to represent his country, who will next head off for a three-Test tour of South Africa, which starts on June 9th.

Also on the scoresheet were Finn Russell, Tuisova, Victor Vito (2), Radraga, Sitaleki Timani and Greig Laidlaw, while Elliot Daly, Piers Francis (2), Zach Mercer, Joe Launchbury and Jonny May all crossed for the home side.

“We struggled to adjust to the speed of the game,” said England head coach Jones.

“When we got fatigued in the last twenty minutes we made some crucial errors in execution and it ended up costing us the game. As an experience for some of the younger players, absolutely outstanding.

“We don’t have our top 15 players. It was a test of our depth. We played against a very good, fast and powerful Barbarians team.”

Ashton and Barbarians coach Pat Lam were in good spirits post match, discussing the contest as well as other traditional Barbarians goings on in the week leading up to the match.

“It was a great opportunity for me and I just wanted to carry on and try and do what I’ve been doing all year. I’m very grateful that I was given the opportunity to do that,” said Ashton.

“I would have liked a couple more, to be honest, but I’ll take three.”