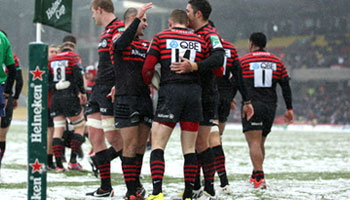 Winger Chris Ashton scored twice as Saracens beat Edinburgh 40-7 to earn themselves a home Heineken Cup quarter-final. As with some other fixtures over the weekend, the falling snow didn’t affect the try scoring too much, as the home side crossed five times.

Ashton picked up his first in the 27th minute when a well placed chip through from Richard Wigglesworth sat up nicely for the England winger to dot down. His second was all the more impressive though, and came about through some deception, quick thinking, and fantastic skill.

As Edinburgh waited for the penalty kick at goal to be lined up, Ashton collected Owen Farrell’s well placed kick and dived over in the corner.

“It was a difficult day for wingers but two touches, two tries – I’d take that every time,” he said.

Sarcens director of rugby Mark McCall said it was great to see Ashton score in such conditions.

“The second try was fantastic.. Ashy and Owen just saw each other and they pulled it off. We can appreciate just how difficult it was out there and we said after the game that the conditions were as bad as it gets, with the ball like a bar of soap,” McCall said.

There was a hint of controversy in it though as while Saracens hadn’t indicated that they were going for goal, the kicking tee had come on to the field, causing the Edinburgh players to relax.

“For their second try, the tee was on the pitch and if the tee’s on the pitch they have to kick at goal,” said Edinburgh head coach Michael Bradley.

“The only reasons the guy next to Farrell can be on the pitch are if there’s an injury or he’s bringing the tee out and I suspect that that shouldn’t have been a try. It would have made our lives a bit easier as well because momentum is a big thing in rugby matches.

“In fairness, it would have been hard to deny Saracens either way because they were by far the better side and they deserved to get the bonus point. So you can argue the toss about their second try but they still scored five tries so they deserved their luck on the day,” he added.

Do you think the try should have been disallowed, or were Edinburgh simply caught napping?