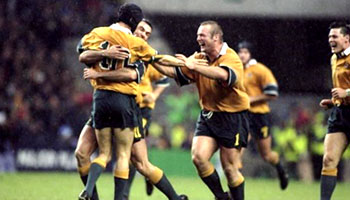 On one of the most sensational weekends of Rugby ever seen, the Semi Finals of the 1999 World Cup will always be remembered for the drama of the French upsetting New Zealand, and the day before that, this classic encounter between Australia and South Africa at Twickenham.

Without a doubt one of the most enthralling matches I myself have personally ever witnessed, the Boks vs the Wallabies in ’99 for a place in the World Cup Final was packed with unbelievable tension, physicality, and a famous kick from the man you’d least expect it from.

A thrilling contest, Matt Burke and Jannie De Beer ruled with the boot as they exchanged kicks for goal throughout the action packed match.

De Beer, who was chief destroyer with his drop kicks against England in the Quarter Final, slotted a penalty under immense pressure with time up on the clocks.

The match went into extra time as the world watched to see what would unfold next. It was non-other than Stephen Larkham who changed the course of the tournaments history breaking the deadlock, knocking the wind out of the Bok sails.

Larkham, one of the best running flyhalfs ever to play, slotted an incredible 48 meter drop goal to win the match for the Wallabies, sending them into the final against France, which they won easily.

Thinking back, its still hard to believe no tries were scored because it was a truly great game of rugby that seemed to have it all.