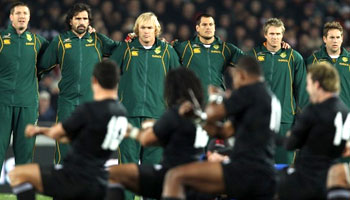 Its been five years since the Kapa O Pango was first performed by the All Blacks. It was in New Zealand, and it was against the Springboks. On Saturday they brought it out once again, and the passion and fire that they put into it seemed to be just the start of what was a fantastic night for New Zealand rugby.

Opinions have always varied about the relevance of the pre-match wardance in this day and age. Many say its outdated, while others say it gives them an unfair advantage and shouldnt be allowed. I happen to think the opposite, and know that some of the best players in world have welcomed the challenge, sometimes thriving in standing up to it.

It seems strange to talk about good Hakas and bad Hakas, but the reality is that there have been times when it has come across routine and lacklustre. Its certainly come a long way since its early days – as you can watch in the History of Rugby series here on RD – but on Saturday there seemed to be something special about it.

Piri Weepu, despite playing off the bench, has become a worthy leader of the Haka after they had toyed with Richie McCaw leading it last year. McCaw himself has said that some of them get together and choose which Haka theyll perform at random during the week leading up to a Test.

There seems to be more to it than that though, and Im sure it was no coincidence that their second Haka, to many a more fearsome sight than the Ka Mate, was pulled out for the big clash at the start of the Tri Nations. There was a definite edge to it.

Whatever the case, it was fantastic to watch, and has been requested so here it is for you to watch and decide for yourself if its one of the better ones youve seen, or not.