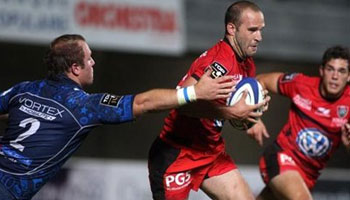 Toulon beat Montpellier 32-25 on Friday night in what was a thrilling French Top 14 game, and yet another win for table toppers, who now have five wins from five outings. Here is a summary of the tries, as both teams scored some classics.

Toulon had led 16-0 at the break after flanker Pierrick Gunther scored one of the most dramatic tries of the season, as a lengthy passage of play ended in winger David Smith putting the loose forward away down the wing.

Freddie Michalak, who sparked the breakout which led to the Gunther try, kicked 11 points and the visitors looked in control of the game, but then South African hooker Rassie van Vuuren scored for Montpellier after a lovely offload by Mamuke Gorgodze.

Van Vuuren scored again a few minutes later but Toulon crossed for another lovely try, thanks to a nice finish from countryman Joe van Niekerk.

Michalak finished the match with 22 points in total, but not before opposite number Francois Trinh-Duc scored for Montpellier shortly before full time. A late penalty from Eric Escande earned the hosts a losing bonus point.

All the tries were of a high standard but the Gunther effort in the first half is well worth seeing.