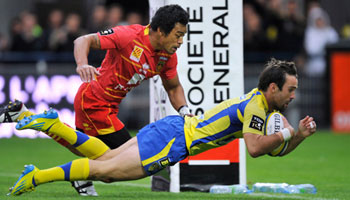 Clermont hosted Pepignan for one of the more bizarre, and entertaining, games of the weekend in the French Top 14 last Saturday. A total of eleven tries were scored as Clermont took the 53-31 victory in front of their home fans.

The hosts’ win meant a third successive defeat for Perpignan this season, despite the Catalans having managed to score four tries on the road.

Things got worse for Perpignan after the game as they now have to deal with significant injury losses. Veteran prop Nicolas Mas will be out for three to four weeks with a torn hamstring, while the man that replaced him, Kisi Pulu, went on to break his arm.

Pulu is ruled out until December, so they are now searching for a ‘medical joker’ to fill the void.

Flanker Jean-Pierre Perez ruptured his knee ligaments, so his season looks to be over after he underwent surgery earlier this week.

There were plenty of great tries scored, so while the quality of this video isn’t great, it’s worth seeing, especially for the pinpoint cross-kicks. Enjoy.