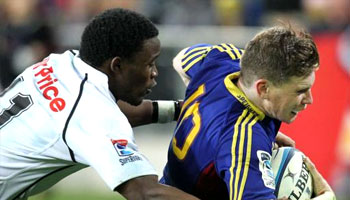 The Highlanders scored one of the tries of the season as they picked up their long overdue first win of the 2013 Super Rugby campaign. They beat the Sharks 25-22 on Saturday in a match that produced a thrilling second half of rugby.

Dunedin breathed a sigh of relief after eighty-odd minutes that resulted in the Highlanders’ first victory in 12 games, the longest losing streak by any New Zealand franchise.

It was a special occasion for Brad Thorn, who was playing his 100th game of Super Rugby, after playing 92 for the Crusaders before making the move back from Dublin to join the Highlanders.

He ended the game off the field after having been yellow carded under relentless pressure from the Sharks, but it was all smiles at the final whistle, well into added time, as Hosea Gear smashed Keegan Daniel five meters out as the visitors came with wave after wave of attack.

“I’ve got to say, I haven’t been that excited for just a round-robin game in my whole career. It was a massive moment,” delighted 37-year-old Thorn said post match.

Each side scored three tries, all of high quality, but Colin Slade landed an extra penalty, proving the difference. It was Slade who crossed earlier in the game for a sensational try, following a great break from Ben Smith and some superb support play by prop Chris King.

The Sharks scored a great try themselves, from the restart, including multiple phases of play and about five minutes of possession, but this one from Slade was without a doubt the try of the match.

View the Sharks try that was scored by Meyer Bosman here

The Sharks try scored by Meyer Bosman directly after Colin Slade’s. This one started at the restart, then went back and forth for five minutes before Bosman finally dived over. Completely different to Slade’s try, but also very enjoyable to watch.