Connacht produce massive upset as they beat Toulouse in France 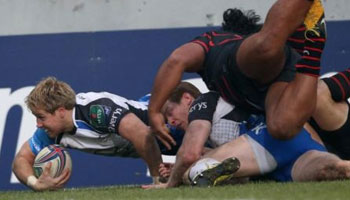 Connacht produced the upset of the weekend, and one of the biggest in Heineken Cup history, as they beat Toulouse 16-14 in France on Sunday. Four time champions Toulouse insist that they did not underestimate the Irish province.

Toulouse scored two tries to one but 11 points from the boot of flyhalf Dan Parks edged the visitors in front. The former Scotland number ten kicked two penalties, a conversion and a drop goal.

Kieran Marmion’s second half score, which required much deliberation by the television match official, gave Connacht a 16-7 lead before Toulouse, who had earlier scored through Jean-Pascal Barraque, then came back with a pushover try of their own, to Thierry Dusautoir.

It was a grand weekend for Irish rugby, one that included big wins for Leinster, Munster and Ulster.

Toulouse coach Guy Noves said that they expected to win against a team bottom of the Pro12.

“We thought we would win. Although that’s not to say that we looked down on our opponents.

“The start of the match made us hopeful of scoring tries and progressing. But we missed more and more chances, time passed, and we definitely began to lose our heads.. we didn’t play the rugby that was required against this Connacht team.

“Strategically we weren’t able to adapt to their very quick repositioning in defence. And then we coughed up a huge amount of possession. There wasn’t enough alternation in our game.”

Despite the win Toulouse are still top of the pool on ten points, level with Saracens but Connacht are one point behind with the return fixture in Galway to come this weekend.

“Now we have to manage the trip to Ireland. But at least we’ve been warned and we know that it will be extremely difficult,” said Noves ahead of what should be a fascinating clash.