Courageous Namibia downed comfortably by All Blacks at Olympic Park 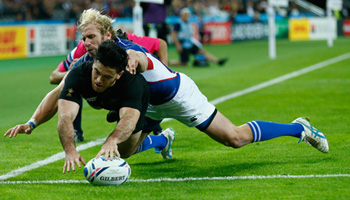 Nehe Milner-Skudder and Julian Savea both scored twice as New Zealand notched up the highest score of the tournament so far, beating Namibia 58-14 at the Olympic Park. The All Blacks scored nine tries, but Namibia limited the damage by slowing down the contest.

Namibia have come a long way since their infamous 142-0 loss to Australia at the 2003 Rugby World Cup. This is a side that, led by warrior Jacques Burger up front, will have high hopes of claiming a Pool C scalp this year.

They tackled manfully and had one or two intercept chances, and when center Johan Deysel bounced off a few All Blacks to score their try, the stadium erupted as one.

“Dad’s here and he’ll be very proud. He might have scored some tries but he never played against the All Blacks,” smiled Deysel post match, talking about Johan Deysel Snr, who himself played for Namibia 25 years ago and scored against Ireland, Portugal and Zimbabwe.

Sonny Bill Williams was on sublime form as he provided some sensational touches in the midfield, allowing those around him to reap the rewards. On one occasion it was Malakai Fekitoa, and right at the death, Milner-Skudder turned provider with a perfect inside quick flick that allowed Cody Taylor to go in at the corner.

That touch from Milner-Skudder is the only way that try would have been scored. Brilliant player. Big win NZ vs courageous Namibia, 58-14

The All Blacks scored nine tries in total, and while they may have been happy to take their foot off the gas a bit at times, and will be pleased that there are no major injury concerns, they were no doubt frustrated by hard-working Namibia,

To put things in perspective, Namibia are not only the lowest ranked team in the tournament, but they have just 1,080 registered players in their tiny country. Most are amateurs, with Burger the most famous star, while a few others play in South Africa’s domestic leagues.

“We’ve got engineers, diamond traders, farmers and construction workers,” explained Saracens’ fearless flanker, Burger, this week. “And a dentist, which is handy.”

“There were a couple of small victories and we’ll take that forward into the next match,” said Burger post NZ. “They’ve given some really good sides, some good hidings. We wanted to make them work for every bit and I think towards the end we got into our stride a little bit.”

Namibia take on Tonga next on Tuesday, then New Zealand face Georgia on Friday.

Rhys Priestland steered Cardiff to a hard-fought 23-17 victory as his side survived a second-half onslaught from the Sharks.

Leinster’s forwards hogged all seven tries for themselves in a runaway 50-15 United Rugby Championship victory over the Scarlets at the RDS.

Edinburgh held on against a late Bulls rally to pick up their second win of the United Rugby Championship at the DAM Health Stadium, winning 17-10.