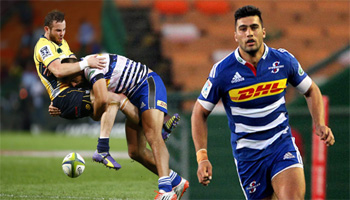 As far as textbook tackling technique goes, it doesn’t get much more accurate than this monster hit from Stormers back Damian de Allende against the Brumbies. It’s another highlight in an impressive season, so he must be firmly in the Springboks selectors sights.

De Allende’s enormous hit on opposite number Robbie Coleman early in the second half was worthy of the subsequent “oooh” noise the Newlands crowd following the clash. While Coleman was completely sold by the long pass, De Allende read it well.

With officials currently very quick to penalise for lifting past the 90 degree mark, or for ineffectively taking responsibility for returning players back to the turf, the execution of De Allende’s tackle was technically perfect.

His powerful nature in defence is merely a string on the 23-year-old centre’s well equipped bow however. An extremely effective offensive player, and integral part of the current Stormers setup, De Allende looks likely to be a Springbok feature in the upcoming World Cup.

Having received a call up in 2014, he was unfortunate to suffer a serious knee ligament injury, forcing him to withdraw from the squad. Following rehabilitation, he returned to international rugby and earned his first cap against Argentina, during the 2014 Rugby Championship.

It isn’t only his attitude on the field that is impressing Bok selectors however, but also his nature off it, made clear by remarks from head Springbok attack coach, Johann van Graan.

“The thing that impresses me most about Damian is his will to succeed. He has a very clear idea of what he wants; he knows where he’s come from and where he’s going. He’s come from a background where he’s had to fight, and he’s brought that attitude through.”

De Allende himself makes no secret of his career aims in rugby.

“My main goal is to go to the World Cup later this year. I am fully committed to the Stormers at this stage, and I know I can improve in just about every area. But that World Cup is in the back of my mind,” the hefty centre said recently.

Unquestionably talented, and with an almost unrivalled passion to succeed, if De Allende continues to play the way he has been, and also tackle as he does below – there’s definitely a good chance that he will be making an appearance in green and gold come September.

This clip of the hit is very short, so if you’ve never seen much of him in action but want to see more, take a look at the up to date Damian de Allende tribute that we’ve added on page two