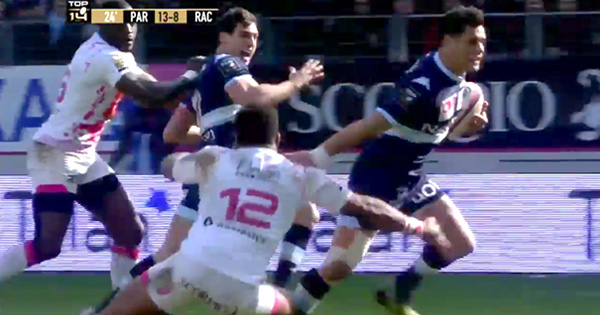 Dan Carter finished off a stunning Racing 92 counter-attacking try as they beat Stade Francais 34-16 in a Top 14 derby on Saturday. The win over their rivals keeps them at the top of the table, thanks in part to Carter but also the likes of Brice Dulin, who was brilliant on the day.

Carter actually limped off injured later in the match, but this first half effort was fantastic to watch, as Joe Rokocoko kicked things off in their 22m, then Casey Laulala and Antonie Claassen linked up, before setting All Black legend Carter away.

He beat one man then fended another before diving over beneath the posts.

The try was sensational to watch but there were question marks over the legality of it, specifically the pass from Laulala that appeared to drift forward, as you can see below.

The graphic above may be a bit deceptive, as the ball can actually end up ahead of where it was passed from, as long as it doesn’t come forward out of the hands.

The official definition of a forward pass is described as: “If the arms of the player passing the ball move towards the opposing team’s dead ball line“

With this one, opinions may be divided. Whatever the case, it was a great try and nice to see the Kiwis all linking up, as well as a South African-French forward in there too.

As for the rest of the match, Brice Dulin set up a brilliant try for Mike Phillips, J ohan Goosen scored a great individual try, and then Dulin started and finished another excellent try of his own.

On the negative side, and obviously not helping their cause any, Sakaria Taulafo was shown a red card for a dangerous spear tackle on Chris Masoe.

View the Carter try above and then all the others, including the red card, in the highlights below