Danny Barrett targeting tacklers is 'Like a Mack truck on a skateboard!' 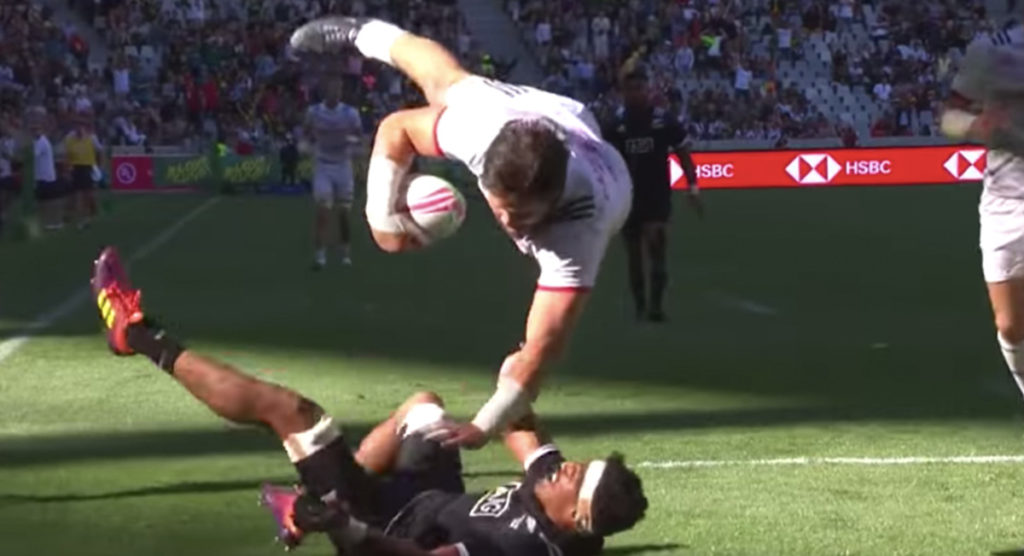 Players on the World Sevens circuit should know by now, if they plan on tackling Danny Barrett in open space, they better come with cruel intentions. Two unfortunate New Zealand defenders were reminded of that in their semi-final clash at the Cape Town Sevens.

Barrett and company advanced to the finals after knocking New Zealand out 31-12 to set up a showdown against perennial powerhouse Fiji. The USA took control after a solid first half, outscoring New Zealand 19-0. Having Barrett and both of their speedsters – Carlin Isles and Perry Baker – healthy and hitting on all cylinders proved too much for the All Blacks Sevens.

Barrett’s run was undoubtedly the highlight of the match, as he bumped aside Vilimoni Koroi and Amanaki Nicole in a 60m run to score with an emphatic leap.

Fiji secured their place in the final with a semi-final win over host South Africa 17-12.

Two electric sides squared off in the final. In the end, Fiji was just too good, taking down the USA 29-15, for their first Cape Town title since 2005.

Even with the loss, things are looking up for the USA. For the second straight tournament, they placed second and now sit alone atop the world rankings. New Zealand are second and Fiji third.

Danny Barrett targeting tacklers is 'Like a Mack truck on a skateboard!' | RugbyDump - Rugby News & Videos