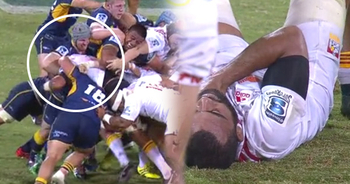 Brumbies forward David Pocock has been suspended for three weeks for a dangerous bit of play againt the Chiefs at the weekend. Pocock was cited and has since pleaded guilty to the charge, after he basically put Michael Leitch in a choke hold in a maul.

Pocock was cited following the match after the Citing Commissioner deemed the incident, in which he was effectively strangling Leitch, to have met the red card threshold for foul play.

SANZAAR Duty Judicial Officer Adam Cassleden accepted a guilty plea from Pocock during the disciplinary hearing after he was charged with having contravened Law 10.4(e) Playing a player without the ball is dangerous play.

Pocock got his arm around the head of Japanese captain Leitch during a maul late in the game, and despite Leitch’s clear protestations and ‘tapping out’, Pocock wouldn’t realease him.

Leitch had to spend some time recovering, and while the referee checked with the TMO to see what had happened, they didn’t spend long enough looking at the footage, so missed it.

Pocock has been suspended for three weeks. Due to the fact the Brumbies have a bye in Rd 7, Pocock will miss Rd 8 and Rd 9 of Super Rugby, in effect making it a two match sanction.

Pocock has issued an official apology via his website. In it he stated the following:

“Yesterday I faced the judiciary for the first time in my rugby career. I am incredibly disappointed with my actions. I endeavour to play the game I love in a way that reflects the kind of toughness and decency I think rugby can teach us.

“On Saturday night I did not live up to those standards, placing Michael Leitch in danger by binding on his neck in a maul. It was not my intention to hurt Michael, but in these sorts of circumstances it is not intention that matters. I am grateful that World Rugby and SANZAAR are concerned about making the game safer for all of us.

“I would like to take this opportunity to apologise again to Michael. And to apologise to the Chiefs, Brumbies and all those who follow rugby. I’d also like to apologise to my team mates who I will let down over the next few weeks while suspended.”