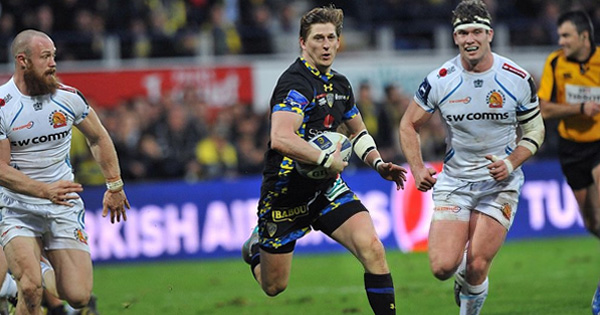 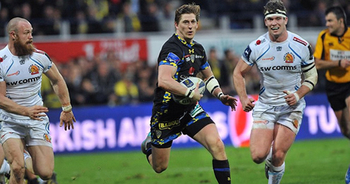 David Strettle scored another top quality try for new club Clermont as they romped to a 42-10 win over Exeter Chiefs at the Stade Marcel Michelin. The French side bounced back after a shock defeat the week previously. Strettle streaked through for this excellent try early on.

Former England winger Strettle appears to be in the form of his career. As with what happened when Nick Abendanon moved to Clermont, Strettle has won over the local fans with some excellent performances of late, including another great try this past weekend.

Capped in 2007 but only having played 14 Tests since, Strettle was picked for England’s Rugby World Cup training squad but instead chose to continue with his move to France.

“The chance to play in a home World Cup was a big temptation but I had made my commitment to a new club, a new way of life, and that was where my responsibility lay,” Strettle told the Telegraph recently.

“Rugby is the lifeblood of this place, of the whole Auvergne region. I loved Saracens and even though we had some great times at Allianz Park, no one could call it a coliseum. The Stade Marcel-Michelin is a bear-pit. It’s brilliant to run out in front of almost 20,000 every home game. The mood of the whole town is shaped by how ASM [Clermont] do.”

Strettle not only missed out on playing at the World Cup, but will also be unavailable to be reaquainted with former Saracens colleagues Steve Borthwick and Paul Gustard.

The pair have been chosen as support staff for new England coach Eddie Jones, however the head coach has said that he will likely uphold the RFU’s policy of not picking players based outside of England.

“I knew the realities of coming here although I can’t lie to you and say that it would not have been amazing to have had any chance of working with Gussy [Gustard] and Steve Borthwick in an England environment.”

As Jones is unlikely to budge, for now Strettle’s focus is solely on success with Clermont, who have had disappointments in Europe in recent times.

“Europe is a huge focus for the club. They’ve lost in the final twice in the last three years (to Toulon) and want to get that silverware.”

View Strettle’s well taken try below, and highlights of the match on page two