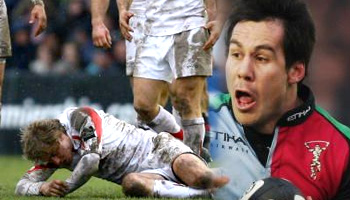 When Newcastle met Harlequins at the Stoop last weekend in a tight and gloomy encounter, little did we know that one of the most talked about hits of the season was about to occur.

The incident in question is De Wet Barry’s late and hard shoulder on Matthew Tait.

The referee gave an instant red, judging that there was intent and the tackle was dangerous.

After a disciplinary hearing however, Barry has since been found not guilty and will be free to to play with immediate effect, despite the majority of pundits expecting to see a lengthy suspension.

Barry has apologised to Tait for the collision, which possibly looked worse than the intent was. He is a far larger man, so any type of collision between the two would end up with Tait coming off second best.

An emotive incident for many though, so it wouldn’t surprise if there are a lot of unhappy Newcastle fans out there.