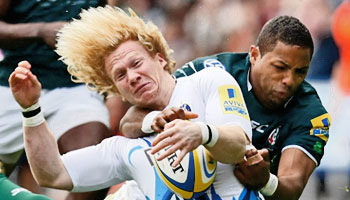 Earlier this week England and London Irish back Delon Armitage received two bans for incidents that took place in an Aviva Premiership match against Bath a few weeks back. He has now been suspended five times this year. His brother, Steffon, could also face suspension, following his lashing out at the procedure via Twitter.

Armitage, who was suspended during the Rugby World Cup for a high tackle on Scotland’s Chris Paterson, has spent a fair amount of time off the park this year. A push on a doping officer in January earned him 8 weeks off – causing him to miss the entire Six Nations – and upon his return he was suspended for a strike on Northampton Saints flyhalf Stephen Myler.

Armitage pleased guilty to the dangerous high tackle, and was later found guilty of dropping the knee into lock Dave Attwood as he went over for a very well taken try in the corner. That happened in the same match, not long after Armitage returned to the field following his time in the sin-bin.

The RFU banned him for 5 weeks for the tackle, and 3 for the knee, but they will run concurrently. “We accept that both these incidents were reckless and not malicious,” said Judge Jeff Blackett.

“However, in relation to the dangerous tackle on Tom Biggs there was the potential for significant injury and for that reason we believe that it was a mid-range entry level offence of six weeks. We increased it to eight because of concerns raised by the IRB about injuries caused by dangerous tackles and because of his poor disciplinary record.

“We then reduced the sanction to five weeks because of his guilty plea, his contrition and the impressive way he conducted himself at the hearing. In relation to the strike to which he also pleaded guilty, we decided that this was a low-end entry offence and for that we imposed a three-week suspension.

“Delon has unfortunately had several disciplinary issues this year and it is a shame that he once again finds himself not playing. However, we hope that he will learn from these events and we look forward to him resuming the game he quite clearly feels very passionate about,” he added.

Meanwhile Delon’s brother Steffon is under investigation from the RFU regarding comments he made about the rulings on Twitter. Steffon, who is capped by England, reportedly called the RFU ‘dickheads‘ and said ‘rugby is turning soft!!! U should have stuck with football!!!!‘

Following the recent investigations and banning of Eliota Fuimaono-Sapolu for similar comments on Twitter, you would think that there may be a second Armitage being suspended some time soon.

Below are the two incidents from the London Irish match against Bath. The second wasn’t discussed by the match commentators as they were focussing on the try being scored, but you can see it briefly anyway. Delon will miss matches in both the Heineken Cup and Aviva Premiership.