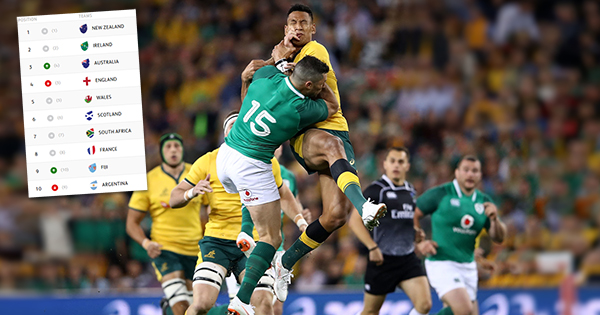 As we head into another weekend of June Internationals, a number of teams could receive a large boost and shake up the official World Rankings, which could have a different look to them come Monday. Here are all the permutations.

Last weekend there were very few changes in the rankings, with only Australia moving up to third after their win over Ireland, while England dropped to fourth after losing to South Africa.

It is the first time in two years that England are out of the top three, and it could get worse for them if they don’t perform in Bloemfontein tomorrow. Fiji meanwhile moved up to match their highest ever position of ninth last weekend, but that is where they will stay regardless of a win or loss against Georgia.

While New Zealand, Australia and South Africa were all victorious last weekend, England, Ireland and France all have a chance to fix things with good wins in the second week of matches.

The All Blacks (1) are firmly at number one and cannot improve on their points rankings even if they pick up another strong win over France (8).

However, France can move up two places to sixth if they win by more than 15 points and other results go their way.

Both sides have a chance of climbing up to 3rd place should they win. England (4) would need to beat the Springboks (7) and hope that Ireland also come out victorious over Australia.

For South Africa, all they need is a win to lift them above England and Scotland, and with one and a quarter points up for grabs for a comprehensive victory, they could potentially leapfrog Wales and Australia too.

A heavy defeat for England could see them drop as low as sixth in the rankings.

The Wallabies (3) will move to second place, nudging Ireland (2) out the way, should they follow up their first Test win with another victory over Ireland.

On the flipside, one and three-quarters of a point are up for grabs for a big Irish win, which would secure their second place standing.

Wales (5) are one of the four teams who have a chance of taking up the third position by the end of the weekend. A second win over Argentina (10) by a similar margin to their 23-10 victory last weekend would give them over half a rating point. They must win by more than 15 points though, and hope that South Africa beat England and Ireland beat Australia.

Argentina’s Los Pumas will stay firm in 10th position even if they are beaten badly.

A win could see the USA Eagles (15) move up to their previous best position of 14th, and go even higher to 13th should they beat Scotland (6) by more than 15 points and if Italy lose to Japan.

Scotland, however, can not be rewarded with any rating points even if they win, as there is a gap of more than 14 points between the two sides.

Buoyed by their 34-17 win last weekend, Japan (11) unfortunately cannot progress in the rankings with a win, but Italy (14), who haven’t won a Test in eight matches, can move up to 12th if they win well in Kobe.

Fiji (9) can not not move higher than their all-time highest ranking of ninth, but will be looking to deny Georgia (12) a win. A convincing victory over Georgia would see Fiji close the gap with France though.

A strong victory for Georgia would see them move into the top 10 for the first time ever. They might even move up to ninth place, should they win big and Argentina lose badly to Wales.

Tonga (13) can’t improve on their current position, with a maximum of just 1.19 points on offer, but Samoa (16) can should they win well and Italy lose against Japan.

Samoa, who are on an eight-match losing streak, will also be keeping a keen eye on what’s happening in Heidelberg between Germany and Portugal, as they will play the winner in a home and away two-match series for Rugby World Cup 2019 qualification. 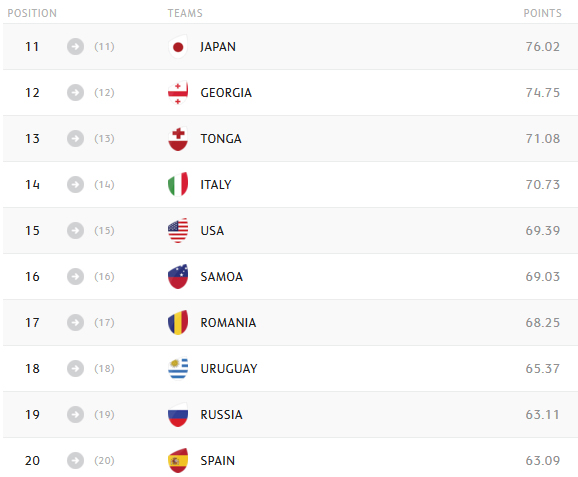