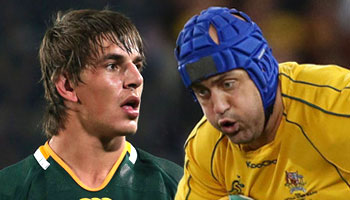 Young Springbok lock Eben Etzebeth has been suspended for two weeks for an attempted headbutt on veteran Wallaby Nathan Sharpe. The incident took place midway through the first half of the Perth Test match between the two sides.

Etzebeth was cited following the match after he was alleged to have contravened Law 10.4 (a) Punching or Striking after he got in a minor scuffle with opposition second rower Sharpe.

At the time it looked as though no contact was made, but replays showed that foreheads made slight contact, which earlier today resulted in a two week ban for Western Province lock Etzebeth.

The citing commisioner deemed the incident to be worthy of a red card, and SANZAR Duty Judicial Officer Nigel Hampton QC suspended Etzebeth for two weeks after ruling the following:

“I was satisfied that this was not an attempt just to push the opposing player away by using his head without contact being made. The player brought his forehead forward and downward with a degree of speed and force into the nose area of the opposing player making contact with that player.

“This was a deliberate act done as a part of an episode of escalating “tit for tat” pushing and shoving between the two players. As to sanction, intentional striking with the head into the face of another is not to be countenanced under any circumstances.”

Etzebeth, who made his Springbok debut against England a few months ago, will miss the Test against the All Blacks this coming Saturday. He will likely be replaced in the squad by 32 year-old Bakkies Botha, who has been playing with Toulon in France.

“Bakkies is on stand-by,” explained coach Heyneke Meyer from Auckland on Monday. “We are in contact with Bakkies. We keep in touch with all the overseas-based players. The guys know who is on stand-by and exactly where they stand.”

Do you think players should be suspended when there is intent involved, or only if they make significant contact? Let us know in the comments below.