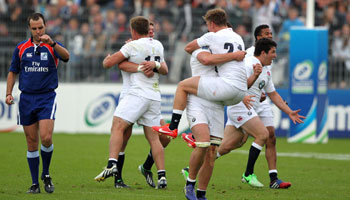 England Under 20’s won the IRB Junior World Championship after coming from behind to beat Wales in the final in the north west of France yesterday. In the third place playoff, South Africa staged a comeback of their own as they beat New Zealand.

Wales led 15-3 at halftime and looked on the way to their first ever JWC title, but failed to capitalise after England went down to 14 men and had a try disallowed shortly before the break.

Jack Nowell and Sam Hill tries brought them back into the game before two penalties by Henry Slade extended the lead, earning them a well deserved victory after having been runners up three times in the past.

Earlier a repeat of last year’s final saw South Africa come from behind to beat New Zealand in the third place playoff in Vannes. The Baby Blacks were up 21-0 at one stage, before the Baby Boks launched a comeback and won the game 41-24.

IRB Junior Player of the Year 2013

While it was disappointment for Wales in the final, young flyhalf Sam Davies was awarded the IRB Junior Player of the Year 2013 title following commanding performances throughout the tournament. He is the first Welshman to win the award, and the first to receive an IRB age grade honour since Gavin Henson was named IRB Young Player of the Year in 2001.

“It is an honour, just to see the names of the other people that have had it before me, it makes it extra special. I’m gutted with the result today but this is a bonus picking up this Award,” he said.

Elsewhere, France beat Argentina to finish in fifth place, Australia finished seventh after beating Ireland, Samoa defeated Scotland to claim ninth place, and the USA were relegated to the IRB Junior World Trophy after they were beaten by Fiji.

Highlights of the final are below, and you can follow the links for the other games, or view all

Highlights of France vs Argentina and Australia vs Ireland

Highlights of Fiji vs USA and Samoa vs Scotland