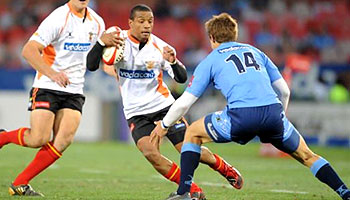 Sevens specialist Fabian Juries was a late inclusion for the Cheetahs when they faced the Bulls at a packed Loftus Versfeld in the Currie Cup this past weekend. The Bulls won the dramatic match 30-27, but it was Juries who caught the eye.

Juries, who is third on the IRB Sevens list of all time top try scorers, has made the transition to the fifteen man game nicely. Despite being a small guy, he possesses incredible speed off the mark, balanced stepping, and an eye for the gap.

Anyone who’s followed Sevens over the years will know that Juries is one of the best players of all time, so to see him make the change to fifteens rugby, and do well, is great.

He was Man of the Match when playing fullback against the Sharks last Saturday, and only made the team for the Bulls match thanks to a late injury to Jongi Nokwe.

Selected on the wing, Juries once again took the Man of the Match honours as he scored two tries of pure quality, the first of which had him beating no less than nine players, including a few notable Springboks, on his way to the try line.