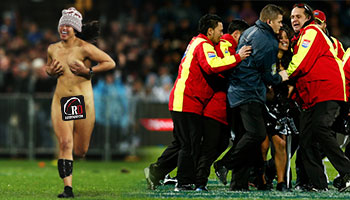 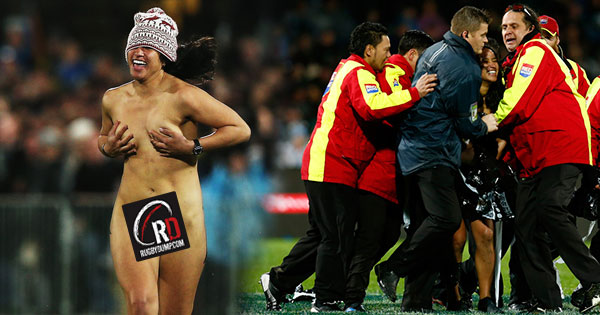 A female streaker who took to the field during the All Blacks’ 28-9 victory over Argentina on Saturday was lucky to leave with only a ban after security nearly took her head off. She’s since said that streaking was on her bucket list, so has no regrets.

With the game petering out in Napier, Rose Kupa took to the field and sprinted across diagonally, evading security before finally being brought down somewhere around the opposite 22m line.

The 25-year-old was arrested and given a pre-charge warning for disorderly behaviour, as well as banned from McLean Park for two years. She isn’t too bothered though.

“I was actually aiming for Richie (McCaw),” she said afterwards.

Rupa was lucky to not get a bad knock in the head when security flew at her, but she managed to evade it. All Blacks coach Steve Hansen has sided with her, to an extent, saying that reactions like that aren’t really necessary.

“It’s not that big a deal is it?” Hansen said, adding that she should have been stopped earlier.

“She entertained everybody there for about 35 seconds. My beef is how they get on (streakers in general, to the field). I think we’ve got to have a better plan with how we stop them getting on and we probably don’t have to smash them over either when we finally catch up with them.”

This follows another incident in New Zealand recently whereby a Canterbury squad member was working as a security guard and launched into a pitch invader’s back when he streaked in Dunedin.

The naked man in question on that night has since said he is surprised that Kupa was let off with only a warning, whereas he was fined $500.

“She touched a player (Israel Dagg). And she was showing a bit more than me anyway,” he said. “It should be the same rule for everyone. If anything, I thought they would’ve been a bit harsher on her after the one I did.”