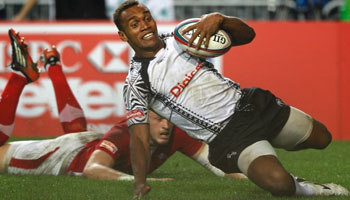 Fiji came from 19-0 down to win a dramatic Hong Kong Sevens Cup Final 26-19, beating Wales who were in their first ever Hong Kong final. Flyer Osea Kolinisau changed the game with a sensational hat-trick after coming on as a second half substitute.

An action packed few days in Hong Kong culminated in a fitting final as Wales took it to the Fijians, but couldn’t hold on for the win three great tries blitzed them in the second period.

Wales reached the final with knockout stage victories over Canada and Kenya.

“We just said that we need not to lose hope and we just need to keep the faith and keep on working because ten minutes is a lot of time in sevens,” said Fiji star Kolinisau.

“It’s really a good feeling to go back to back and especially to be the first team in this season to win two cup titles. It’s really important because you see there is four different winners from the first four legs so we hope to continue this in Japan,” he added.

In the other finals, Samoa beat Canada in the Plate, England beat Hong Kong in the Bowl, and France beat Argentina for the Shield. New Zealand came third and extend their overall series lead to 25 points, with Fiji and Samoa trailing, followed by South Africa and Kenya.

After all the festivities of Hong Kong, the World Series moves to Tokyo next, March 30-31.

Below are the final day’s highlights, including the cup finals