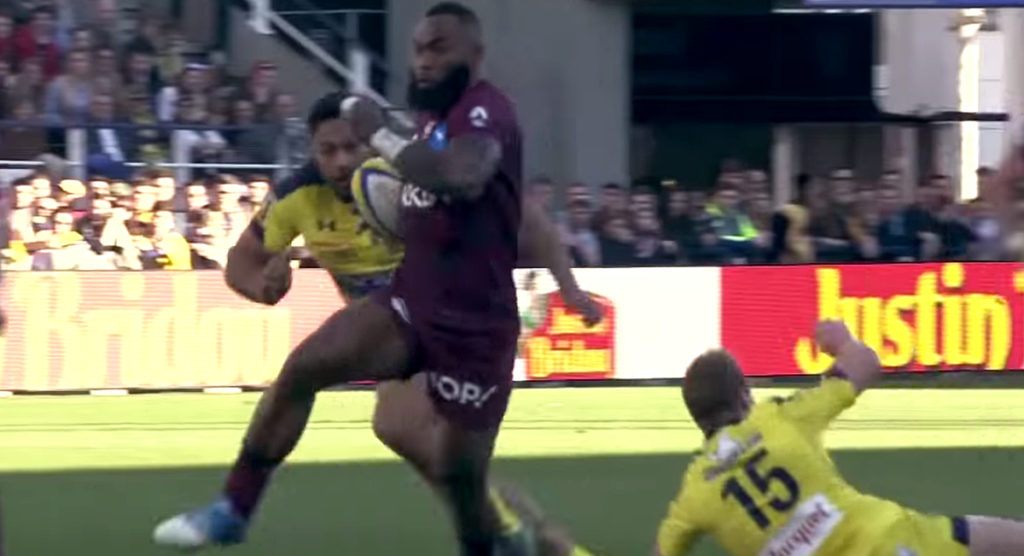 Bordeaux-Bègles’ Fijian flyer Semi Radradra was in fine form once again this passed weekend, despite his side falling to a heavy 40-20 defeat at the hands of Clermont Auvergne at the Stade Marcel Michelin.

Recruited from Toulon at the end of last season, Radradra is renowned for his strength in the tackle area and slewing, mazy running – particularly in open play.

The 26-year-old scored a belter of a try against the title-contending Clermont after running a superb supporting line on the outside of Seta Tamanivalu and then beating four defenders en route to the line.

It came as a shot in the arm to Bordeaux as first-half try scorer Blair Connor was sent off after a dangerous tip-tackle on Clermont’s Nick Abdendanon at the base of a ruck in the 54th minute.

Bordeaux went down to 14-men for the remainder, but in all reality, Clermont were in complete control anyway and duly outscored the visitors from Gironde by three tries to two in the second half.

Second-row Paul Jedrasiak scored the try of the game with a typically Clermont coast-to-coast counter attack effort, featuring a terrific out-of-the-tackle offload from Rémi Grosso in the build-up.

Clermont momentarily returned to the top of the standings, only to be usurped by Toulouse, who recorded a bonus-point win away to Racing 92. Bordeaux remain in contention for the play-offs at the end of the season, currently lying in fifth, 15 points off Toulouse.

ALSO WATCH: The 5 best tries from Round 16