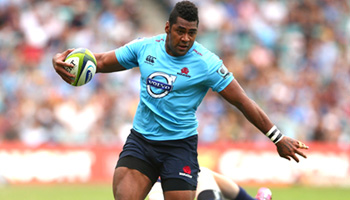 Glasgow Warriors have signaled their intent to once again challenge for next season’s PRO12 title by signing big Fijian flyer Taqele Naiyaravoro. The 23-year-old has impressed of late, so here’s a look at one of his best tries, plus other recent highlights.

The Waratah’s winger is currently the talk of Australia at the moment after scoring a Jonah Lomu-esque try against the Western Force recently, prompting him to be thrown into the Wallaby’s wingers debate.

There was some concern in Scotland that Glasgow would lose try-scoring potential after they allowed Niko Matawalu, Sean Maitland and D.T.H van der Merwe to leave next season, but Naiyaravoro’s signing seems to have blunted those thoughts.

The 6ft 5in, 19-stone (123kg) behemoth, who has been a prolific try scorer in both codes of rugby, has signed a three-year deal with the club, meaning he could be eligible for Scotland on residency rules after that period.

“Glasgow have been talking to me for a while and opened the door for me, so I’m happy to have signed a long-term contract with the club,” said the powerfully built winger.

“I’m looking forward to moving to Glasgow with my family to continue my development. They are a strong team and it’s really exciting to get the opportunity to move over there and play my rugby in Scotland next season.

“It will be a new challenge for me to play in the Guinness PRO12 and compete against the best sides in Europe in the Champions Cup,” he added.

Glasgow Warriors have put together a compilation video of Naiyaravoro’s latest exploits with the Waratahs, and below you can see that sensational try he scored against the Force. On page two there is also a big tackle he made on 115kg winger, Frank Halai.

Big hit on Frank Halai, who himself is quite a unit