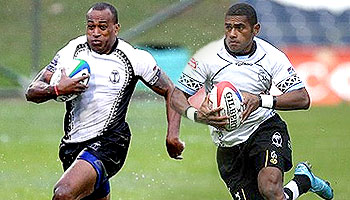 Last month Fiji won the Pacific Nations Cup for the first time with a 34-21 victory over Tonga in the final match. They scored some great tries on the way to the title, but none better than these too in their opening rain-soaked match against Japan.

The IRB Pacific Nations Cup took place during a busy period of Test match rugby that included the Lions tour of Australia, France’s tour of New Zealand and the Quad Series in South Africa. For those reasons it was unfortunately overshadowed a little, but still offered plenty of value.

Some great rugby was played and in the opening match at Churchill Park in Lautoka, Fiji scored four great tries against Japan, despite a heavy downpour, to pick up a 22-8 victory.

Two of the best are featured below for different reasons, and both are well worth watching.

The first was scored just 31 seconds after kickoff as veteran Sireli Bobo, now 37-years-old believe it or not, made a break before getting back in support to take the final pass and trot over. The Japanese tackling left a bit to be desired but it was a sensational start to the game.

Things were a bit tighter for the rest of the contest, until late in the second half when replacement Nikola Matawalu sparked an incredible try.

Glasgow Warriors fans will be familiar with the skill of the speedy scrumhalf. He pulled off the impossible a few times in the last season, scoring nine tries in 22 appearances and being named Player of the Season. He also signed a contract extension that will keep him at the club until 2015.

Matawalu teamed up with winger Aisea Natoga and despite the weather, showed his flair as he accelerated away down field then produced a superb no-look flick pass to put Natoga in.

Fiji went on to claim the overall title. Their victory means that there have now been three different winners of the IRB Pacific Nations Cup in the last three years. Fiji finished with 16 points total after three wins and one defeat. Canada were second on 13 points and Tonga third on 10.

While Bobo’s try was impressive because of when it was scored, the main reason for this post is to share the incredible bit of play by Matawalu and Natoga for the second try. The nice bit of sportsmanship and camaraderie that took place after the match is a nice bonus too.