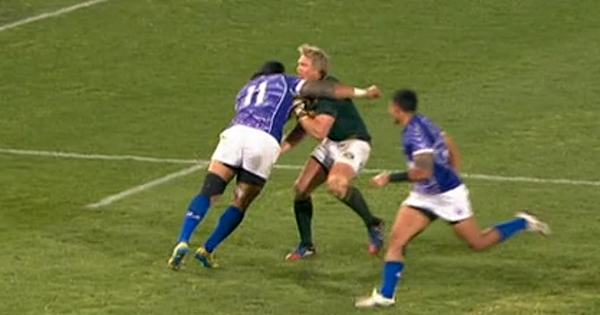 Ahead of this year’s World Rugby U20 Championship, which kicks off in France on Wednesday, the sport’s governing body has announced a series of dedicated tackle law trials to combat head injuries in the game. One of them deals with tackle height, the other, tackle positioning.

In what appears to have been widely misinterpreted news release, World Rugby will run two separate high tackle law trials, in two different tournaments, the first of which kicks off this week.

The key change in the law will centre around the height of acceptable tackles, with a view to turning trials into permanent law and extending them to the senior game as well.

The trials come amid continuing efforts to lower the cases of concussion and serious head injuries and were developed following research which concluded that:

The research – conducted in conjunction with renowned physiologist and World Rugby Research Consultant Ross Tucker – is particularly relevant after Ireland international Jarrad Payne was forced to retire from the game on medical grounds following a series of headaches.

The Kiwi sustained a head injury while playing for the British and Irish Lions against New Zealand in 2017 and has not played since. Payne is just one of a number of players who have bore the brunt of head clashes in recent years, the most notable being the worryingly frequent concussions for Wales winger George North.

In an official release, World Rugby announced the details of the Law 9.13 amendments, covering the World Rugby U20 Championship and U20 Trophy.

In the latter, lower profile tournament, a new below the ‘nipple line’ target will be set, as opposed to the traditional shoulder line being what constitutes a high tackle or not.

All Blacks coach Steve Hansen said that he quite liked the concept. “I think it’s good, I think it’s better than below-the-shoulder because there’s quite a lot of games where you make the tackle and it doesn’t look to be a bad tackle and yet it’s been penalised.

“The clearer you can make it the better – we all know where our nipples are, so hit below that and you’re okay.”

Whereas former Wallaby, Waratahs and Toulon star Drew Mitchell felt it will create a new problem.

“By saying ‘nipple’ in the new law, you’re making a generalisation that referees can’t possibly rule with any consistency. They’ve just created a greater grey area and confusion around high tackles.

“They could have gone with armpits, the referees and fans can see where that is. This has been poorly worded,” said Mitchell.

It must be reiterated, however, that this is simply a trial and in the higher profile U20 World Championship, which kicks off this week, the main focus is outlawing the upright tackle, as explained below.

You can also view a more recent video of Tucker talking about the new law trials here.