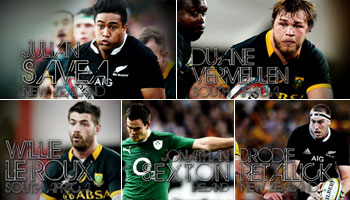 The International Rugby Board has announced a shortlist of five nominees for the IRB World Rugby Player of the Year 2014. The list comprises five players that were selected after forty-five matches were reviewed by the panel. Three countries are represented.

Two South Africans, two New Zealanders and an Irishman make up the prestigious shortlist that features a spread across the field – two outside backs, a fly-half, a number eight and a lock.

As worded by the IRB, here is a little bit about each player and their 2014 performances.

WILLIE LE ROUX (South Africa) A strong and elusive runner from full-back, Willie le Roux has started all 10 of South Africa’s Tests in 2014 to take his tally to 22 Tests since his debut against Italy in June 2013. The 25-year-old, who has scored seven Test tries, is strong under the high ball and is potentially the most exciting South Africa outside back to come onto the scene since Bryan Habana.

BRODIE RETALLICK (New Zealand) A towering presence in the lineout, Brodie Retallick’s partnership with Sam Whitelock makes arguably the best second row in world rugby at present. The 23-year-old’s powerful runs and work-rate across the pitch have brought him to the fore in 2014. An IRB Junior World Championship winner in 2011, Retallick has 35 Tests and one try – against South Africa in the 2013 Rugby Championship – to his name.

JULIAN SAVEA (New Zealand) With a try-scoring rate that few can match, Julian Savea has inevitably drawn comparisons with legendary All Black wing Jonah Lomu this year. The 24-year-old has scored 10 tries in 2014, including a hat-trick against England in the third Test in June, to take his tally to 29 tries in just 31 Tests. Savea was named the IRB Junior Player of the Year in 2010 after helping New Zealand win a third successive IRB Junior World Championship title.

JONATHAN SEXTON (Ireland) The oldest of the nominees at 29, Jonathan Sexton has been the stand-out player for Ireland in 2014 as they claimed the Six Nations title, a first series win in Argentina in June and the scalp of South Africa in Dublin last weekend. His control of the game at fly-half and perfect record from the kicking tee earned the 49-Test veteran the man of the match award against the Springboks.

DUANE VERMEULEN (South Africa) A classic South African number 8, Duane Vermeulen has won plaudits across the world in 2014 for his work at the breakdown, power in the tackle and his destructive ball carrying. With 26 Tests to his name, the 28-year-old was named man of the man in South Africa’s 27-25 victory over world champions New Zealand in October with his battle with Kieran Read worth the admission price alone.

The panel, comprising Will Greenwood, Gavin Hastings, Raphaël Ibanez, Francois Pienaar, Agustín Pichot, Scott Quinnell, Tana Umaga and Paul Wallace, has deliberated on every major Test played in 2014, starting with the RBS Six Nations and culminating with the November internationals.

Previous winners include Kieran Read, Dan Carter, Thierry Dusautoir, Shane Williams, Bryan Habana, Schalk Burger, Jonny Wilkinson and Richie McCaw with the two All Black centurions the only players to have won the award on more than one occasion.

Who do you think is most deserving of the award this year?