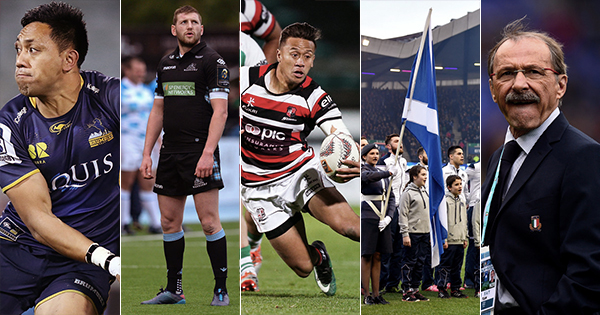 2018 is set to deliver another year of fantastic rugby action. And while there are no Lions tours or World Cups to look forward to, it will nonetheless be another enthralling, entertaining and intriguing 12 months.

There have been plenty of new loans and signings, either for the start of 2018 or for later down the line. We’ve picked out the five things to look out for this year.

The biggest news of 2017 was the return of Australian internationalist Christian Lealiifano – who successfully battled Leukaemia – to action with Irish province Ulster.

The Wallaby was on loan with Les Kiss’ side for five months and has quickly become a crowd favourite at the Kingspan. His 26 points in his time in Belfast perhaps don’t do it justice but his influence on his team-mates has been felt throughout the side, particularly during the 52-24 rout of Harlequins in December.

He will return to the Brumbies for his final year of contract before deciding where to go next.

Scotland’s mercurial stand-off Russell will jump ship across the channel to replace Dan Carter at Racing 92 after the summer.

In one of rugby’s worst kept secrets, the Glasgow stalwart agreed terms to team up with Jacky Lorenzetti’s squad in Paris after French newspaper L’Equipe initially leaked the story in the summer.

Vern Cotter’s reign as Scotland head coach came to an end following the culmination of this year’s 6 Nations in March and as the Kiwi headed back to the French Top 14 with Montpellier, his place within the national squad was taken by former player Gregor Townsend.

Townsend quickly picked up where Cotter left off and recorded historic home and away (pun not intended) victories over Australia, the former being a record 51-24 thumping at Murrayfield.

Scotland are a team on form and on the up with many tipping them to be the surprise package of the 2018 season. The age-old conundrum of living up to expectations will however, play on the Scots’ minds.

Former Toulouse head coach Guy Novès has been shown the door by the Fédération Française de Rugby (FFR) and been replaced by Jacques Brunel – who led Perpignan to the Top 14 title in 2009 before joining Italy for six years.

It is an unprecedented move by the FFR who had never previously sacked an incumbent coach. The decision is particularly damning as it occurred on the eve of the 2018 6 Nations.

Novès, one of the most decorated French club coaches in history, had a poor success rate with the national side, winning just seven of 21 games. His relationship with FFR president, and former French coach Bernard Laporte is known to be frosty, but Laporte insists his personal feelings did not play a part in the decision.

Brunel, who was announced on Wednesday, has been within the Bordeaux Bègles coaching set-up for the last two seasons and notably led Italy to two famous wins over France during his tenure (in 2011 and 2013, both in Rome).

The twinkle toes of Samoan rugby, Tim Nanai-Williams will move to Clermont Auvergne after signing a three-year deal to play with the Top 14 champions.

Nanai-Williams, the cousin of All Black Sonny Bill, is currently plying his trade with the Chiefs (his second stint with the Waikato side) and Counties Manukau and played a part in his country’s end-of-year internationals in Europe.

An exciting attacker with ball in hand who can also play stand-off, wing and full-back, it is a racing certainty that the Clermont faithful will embrace Williams with open arms come September 2018.