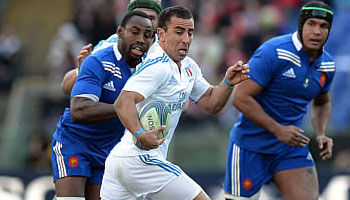 Luciano Orquera was a well deserved Man of the Match as Italy achieved a famous 23-18 upset victory over France in Rome on Sunday. Here is a quick look at some of Orquera’s best bits on the day, which included setting up two tries and kicking superbly.

Flyhalf Orquera said post match that Italy were extremely motivated and had intended to do all they could for their second victory over France in three seasons, the last coming in 2011.

“We were mentally strong right from the beginning. After two years we have beaten France again in Rome. We wanted to win at any cost and we never gave up,” the 31-year-old Zebre flyhalf said.

Italy coach Jacques Brunel has unsurprisingly stuck with Orquera for the upcoming game against Scotland on Saturday, keeping faith in the pairing he has with Treviso number nine Tobias Botes.

Italy beat Scotland in their final game of the Six Nations last year, so will be aiming for their third successive victory in the tournament, and are determined to avoid the wooden spoon yet again.