Footage and recaps of the latest RWC 2015 Bans 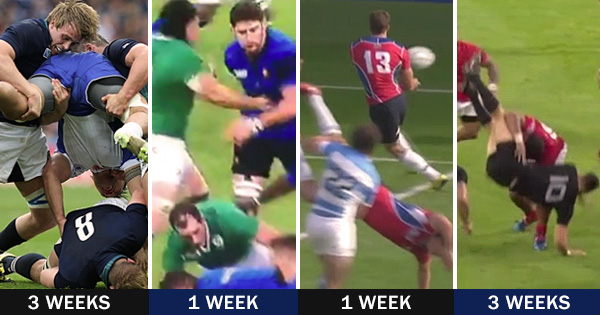 One of the few downsides to this thoroughly enjoyable World Cup has been some of the TMO intervention, citings and suspensions that have taken place. Viewers have been confused and disappointed by a lot of the decisions, that quite frankly, don’t always make sense.

We all know what happened with the Alesana Tuilagi situation, and in this past week there have been a few more that have caused fans to wonder why there appears to be such inconsistency, particularly when so much is on the line in terms of careers and of course, results.

Here is a look at four such cases from the last round. Under each write-up you can find a link to the official hearing document, which may shed some light on the process.

Scotland have lodged an appeal against the bans dished out to hooker Ross Ford and lock Jonny Gray for the ‘lifting tackle’ on Jack Lam when Scotland played Samoa. While they reportedly are not set to contest the guilty charge, they do feel three weeks is incorrect.

Scotland play Australia in the quarter final this weekend so the loss of Ford and Gray is huge, prompting management to take a closer look at the incident.

“Both players have exemplary records and are widely acknowledged as model professionals who play the game in the right spirit. Their actions had no malice or harmful intention. Ross and Jonny have both expressed their surprise and disappointment at the three-week suspension which has been handed down,” said a Scottish Rugby Union statement.

World Rugby (formerly the IRB) have set out to punish ‘lifting tackles’ for some time now. Anything above the horizontal, no matter if it’s actually dangerous or not, usually ends up in a yellow or red card, and often a suspension.

In this case, the Judicial Officer deemed the act of foul play merited a low-end entry point of four weeks. He added one week for aggravation due to the need to deter this type of dangerous foul play. The suspension was then reduced to a period of three weeks for each player, due to their remorse, good character and clean records.

World Rugby’s rules regarding citings is that, believe it or not, the referee’s opinion on the incident can actually be viewed as inadmissable. In the case of Jaco Peyper, who was right there and saw what happened, the South African referee submitted his thoughts via email. He stated that he felt the position of Lam contributed to it.

“I can confirm I indeed saw the incident live referred to in the citing complaint. Samoa number seven found himself in position competing for the ball with his head below his hips already.

“The Scotland arriving players, number five and number two in an attempt to remove the threat to possession as per normal and in the dynamics lifted Samoa number seven’s legs and he tumbled over, however the player (was) supported on his hands throughout. After our internal performance review process, I am satisfied that I dealt with the incident appropriately.”

Scotland loose forward and lock cover, Dave Denton said: “It is difficult from our point of view, because for us, we’ve got a split second to make a decision that could have ramifications for the next three weeks.”

Ireland will be without Sean O’Brien when they take on Argentina in their Quarter Final on Sunday. O’Brien was suspended for 1 week following a disciplinary hearing that reportedly took close to eight hours. The punch took place in the opening minute of the clash with France.

French lock Pascal Pape appeared to hold O’Brien back slightly, causing the powerhouse flanker to lash out with a strike to the midriff. Pape dropped instantly, and required some attention.

The officials at the time missed the incident, but the citing followed and after a lengthy process, which included reviews of all camera angles and additional evidence and submissions from both O’Brien and his legal representative, he was banned for just one week.

That followed an initial ruling of two weeks, which was reduced due to his good behaviour and clean record. He will miss Ireland’s quarter final against Argentina, but should they win, will be available for the semi final.

Tonga’s Paula Ngaumo received a yellow card and three week suspension for this dangerous tackle on Dan Carter during the Pool C match against New Zealand at St James Park in Newcastle. He was cited and banned under Law 10.4(j) for a tip tackle.

Ngauamo admitted committing the act of foul play, which merited a low-end entry point of four weeks. One week was added to deter from these types of dangerous tackles, but it after taking into account mitigating factors including his conduct prior to and at the hearing, his remorse, good character and clean disciplinary record, the ban was reduced to 3 weeks.

He plays at French club Mont-de-Marsan, so will serve out the rest of his ban there.

While Carter did land on his side, he was lifted and brought to ground with force, so the yellow card was no surprise. On the surface three weeks feels quite harsh though. However for the reasons stated above, and included in the full document, World Rugby felt it was appropriate. You can read more about it via the link below.

While Ireland will miss the services of Sean O’Brien, Argentina themselves will be without a valuable player, as centre Marcelo Bosch has been suspended for one week for the dangerous tackle he made against Namibia.

Bosch had actually just come on as a replacement in the 64-19 try-fest, but with Namibia hot on attack, he followed through with a clearly dangerous lifting tackle on playmaker Theuns Kotze.

Bosch was shown a yellow card and later admitted to being guilty of the offence.

It was deemed to have been low entry, 2 weeks, but then all the usual mitagating factors resulted in it being reduced to one week. The ban takes effect immediately and will run up to and include 18 October, 2015. Therefore if Argentina beat Ireland this weekend and make the Semi Finals, Bosch will be available. They will play the winner of Australia and Scotland.