France XV narrowly miss out on All Black victory in Lyon 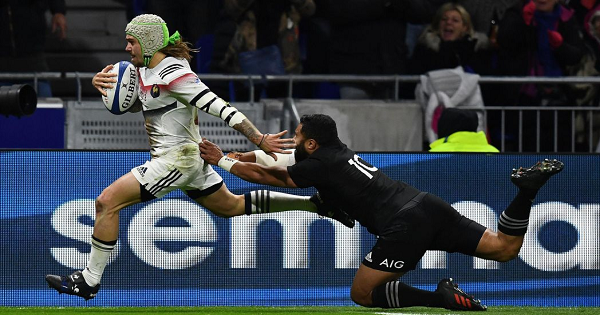 After their 38-18 loss at home, France faced New Zealand for the second time in four days in a tightly-fought match in Lyon’s Groupama Stadium, which the visitors edged 28-23.

The Kiwis were largely an experimental second XV while the home side featured a mix of youth and experience, with the likes of Scott Spedding, Yoann Maestri and François Trinh-Duc joining newcomers Gabriel Lacroix and Secu Macalou.

La Rochelle’s Lacroix grabbed two excellent tries in a first half which France led 15-14 despite going behind early on thanks to an early Liam Squire score.

New Zealand reclaimed the lead after the break and actually held a 10-point advantage entering the closing stages after two quick-fire tries from Patrick Tuipulotu and Ngani Laumape.

While Lacroix’s second try and a further score from Henry Chavancy brought Les Bleus to within striking distance, Guy Novès’ side fell short of a morale-boosting victory on home soil.

Whether France have turned a corner from their recent poor form remains to be seen. They showed signs of promise during Saturday’s first Test but without key figures such as Camille Lopez, they struggled to match the power and relentlessness of the All Blacks throughout.

France will return to Paris this weekend when they play South Africa at the Stade de France.