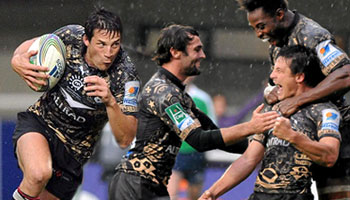 Flyhalf Francois Trinh-Duc was instrumental in Montpellier’s 33-18 pool six Heineken Cup win over Sale last weekend. He scored their opening try and later set up this classic with a delicate chip and chase and then a brilliant inside pass.

Sale suffered their seventh defeat in eight games, but are still in contention, tied with Montpellier in second place in pool six behind leaders Toulon, who they will face twice before January.

“It got a bit messy and sloppy for us, and we must give credit to Francois Trinh Duc. He set up two great tries with chip kicks and finished one himself,” said Sale head coach Bryan Redpath.

“Winning here is a difficult challenge and winning matches in Europe is hard. We did that last weekend against the Blues and we’ve come here and given a reasonable account of ourselves.”

The Montpellier pack took charge in the second half, allowing the number ten to do what he does best as he sparked an incredible period of play that included this superb effort.

The home side failed to secure a bonus point but on a personal note Trinh-Duc showed why he’ll no doubt play a major role in France’s upcoming matches against Australia, Argentina, and Samoa.