Friday Funnies - A day in the life of Paul O'Connell 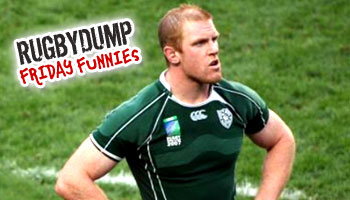 With the British and Irish Lions tour of South Africa only a few months away, there’s been plenty of talk about who will lead the side to battle against the world champions. For many, Paul OConnell is the man for the job.

OConnell is as hard as they come, an inspiring leader, and has been at the helm of what is one of the most successful clubs in the Northern Hemisphere currently, Munster.

With his country Ireland, hes become one of the most respected locks in world rugby, and as is seen in this first clip, is a rousing figure.

This weeks funny comes from a skit that was performed by an Irish National radio Station Today FM.

The first clip seen here comes from a documentary and shows OConnells manic aggression psyche-up talk before Irelands match against France in 2007. It gives you the background knowledge needed for the second clip.

After watching the first, hit play on the second and youll hear the radio station doing their take on a Day in the life of Paul OConnell. Eddie OSullivan and Brian ODriscoll feature in the clip too, although OConnell doesnt have much time for BOD.

Have a good weekend, and enjoy the Six Nations, Super 14, Guinness Premiership, Top 14, Magners League… and whatever else is going on. It’s a great time to be a rugby fan.

Eddie Jones believes Marcus Smith will only realise his full potential in his “late twenties” but Harlequins attack coach Nick Evans thinks his mercurial outside half is already operating at a stratospheric level.