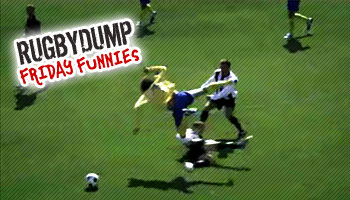 As we all know, Rugby’s appeal has meant that it’s a far reaching and much played sport all over the globe. While some may think that it’s only the ‘traditional’ nations that have a strong rugby culture, the reality is that many countries around the world not only play rugby, but in fact love and live for the sport.

There’s not a day that goes by that I don’t receive an email from a fan in a non-powerhouse rugby country. From Chile to Kazakhstan, through the power of the internet, we’re reaching new fans every day, spreading the rugby love and hoping that by doing our bit, we’re encouraging new players to take up the game and get involved, no matter if you’re in England or Albania.

So while certain other sports will always dominate global numbers because of a number of factors, rugby fans and players will always have pride in knowing that the sport we love is generally played with honesty, integrity, and sportsmanship. Three key aspects that are perhaps missing elsewhere.

This funny rugby advert from the Czech Republic has a little dig at another sport that some of us may also be fans of, but surely acknowledge that all is not right in the way it’s played at times.

Now updated with the English version