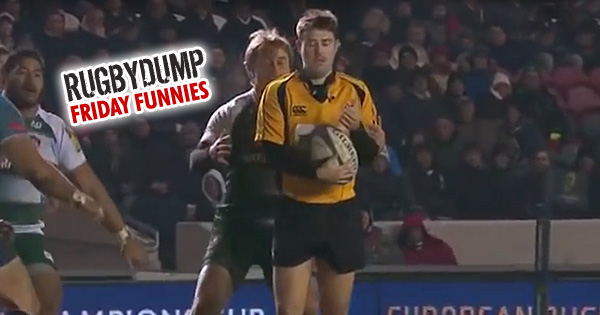 Sometimes when referees get in the way they end up on their backsides, but on this occasion Ben Whitehouse found himself in the perfect position to execute an intercept, and he did so brilliantly. Great hands resulted in him catching the ball in the breadbasket, beating Matthew Tait to it.

The look on his face is priceless as he realises that all eyes will be on him, and the likes of Manu Tuilagi probably won’t be too pleased.

Tuilagi, and the rest of the Leicester Tigers players, were in good spirits though and it was chalked down to simply being in the wrong place at the wrong time.

Earlier this week referee Wayne Barnes was also in the wrong place at the wrong time, however he got pushed by a Clermont flanker. The man in question, Viktor Kolelishvili, has since been banned for 14 weeks. You can watch that unsavoury incident here.