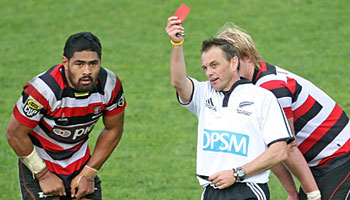 Counties Manukau loose forward Fritz Lee faces a possible lengthy suspension after he was sent from the field during his sides 40-24 win over Northland in the ITM Cup on Sunday. Lee’s high tackle is one of the worst looking hits you’ll see for some time.

Northland looked set to score after a great counter attack set up replacement scrumhalf Luke Hamilton, but he was cut down to size by the trailing left arm of Lee, who nearly decapitated him.

“It was hard to tackle him because he was a little bugger. I knew he was going to step back so I put my arm out there,” said Lee after the game. “I was pretty shocked. I was hoping for a yellow. That’s the first time I’ve got a red. Hopefully it won’t finish my season, he added.

Tana Umaga has said he feels that Lee is close to All Blacks selection and hopes that the tackle, which didnt have malice in his opinion, doesnt affect his chances.

“It was definitely reactionary but we don’t know how the judiciary is going to see it or what happens from there. He’ll be a big loss for us,” Umaga said.

“Obviously there’s a lot of good loose forwards going around but he’d have to be on everyone’s lips and he might be in the thinking for the end of year tour. He’s the physical presence, he’s fit, he’s over the ball at the breakdown, he runs with the ball and he’s very skilful as well,” he added.

Referee Chris Pollock had no option but to show Lee the straight red, the first of the ITM Cup, but Northland coach Bryce Woodward was livid that a penalty try was not awarded.

“He deserved to go and we should have got a penalty try,” Woodward said.

“It was a poor decision. He probably didn’t get any help from the assistant referees. Clearly if that tackle hadn’t have been made he would have scored under the posts. He said he was unsighted about the defenders coming back so he made the decision accordingly but it was a poor one.”

Lee will head to Wellington for a disciplinary hearing where hell hope his good record will work in his favour. “The best case is guilty and I’ll probably get two or three weeks off and hopefully I’ll be back for our last game,” he said.