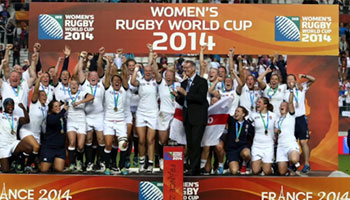 England Women’s coach Gary Street picked up two awards at the UK Coaching Awards in Glasgow. He insists he has already identified the next crop of England youngsters ready to match the achievements of this season’s record-breakers.

Head coach Street masterminded England to their first ever Women’s Rugby World Cup title in August as they recorded a 21-9 win over Canada in the final in Paris.

The success has earned the team much adulation and nominations with Street the latest to benefit at the UK Coaching Awards, supported by Gillette.

Street was named both High Performance and UK Coach of the Year at the Awards, which celebrate outstanding successes and achievements of some of the UK’s top coaches from a variety of different standards and sporting disciplines.

A number of players from England’s World Cup-winning squad have since retired though, including the likes of Margaret Alphonsi, Joanna McGilchrist and Katherine Merchant who won 195 international caps between them.

But former scrum-half Street claims the next batch of players are ready and eager to make a mark of their own. “Winning the World Cup was amazing – it had been a long time coming,” he said. “It was great to see all the girls who were retiring go out on top.

“They had put a hell of a lot of work in and they deserved their last game for England to be a World Cup final. They deserve their rest, hopefully they will have some good memories and we will build again.

“We’ve got an amazing programme and I’ve picked five 18 year olds in the current England squad on the basis that they’re good enough already – so it’s exciting times. There’s the Six Nations and the World 7s series with the Rio Olympics coming up. We’ve got a battle on two fronts and we will have to juggle the squads but that’s my job to do.”

Street, who first got involved with the women’s game in 1992 and took over as head coach of the England team seven years ago, also led the Red Rose to six consecutive Six Nations Championships, including four Grand Slams, before missing out to France in this year’s edition.

But Street was quick to point out the effort of his entire coaching team and the positive impact the recognition would have on women’s rugby after receiving his awards from HRH The Princess Royal, who is a patron of Sports Coach UK.

“The award isn’t just for me – it’s for the whole coaching staff, backroom staff and the players performing,” he added. “It’s nice to go and pick up these things but it’s about the lasting effect and getting people playing rugby – it’s about kids playing sport generally.

“I think recognition will help women’s sport grow – nights like these need to keep going so people are aware of what the sporting landscape looks like.

“Gillette’s participation is fantastic – it’s a great partnership between them and Sport Coach UK. The quality of coaches from grassroots through to elite level is wonderful and long may it continue.”

Gary Street was speaking at the UK Coaching Awards, supported by Gillette.