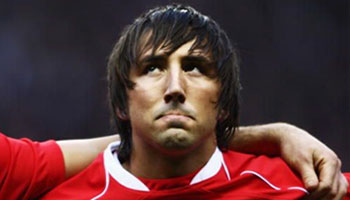 It looks as though Gavin Henson was lucky to get away with this hit on Shane Horgan. Horgan is a far larger man and yet he was absolutely flattened by Henson, which makes one think that the shoulder was what supplied the majority of the impact.

Henson is bigger and stronger than people realise, but the fact that he stayed on his feet, and Horgan went flying, seems to tell the story. The referee shouted ‘Chest chest’, meaning the hit wasn’t high, but Henson made absolutely no effort to wrap his arms around Horgan.

It would have been great to see it from another angle, preferably from the side the ref was coming from. Perhaps Henson got the left arm around him, making it look like a legit tackle.

Congratulations to Wales for achieving the Triple Crown and beating Ireland at home, capping off a great season so far. This incident was one that was highly requested though.

Was Henson as innocent as he looks above, or has Wayne Barnes got it wrong?