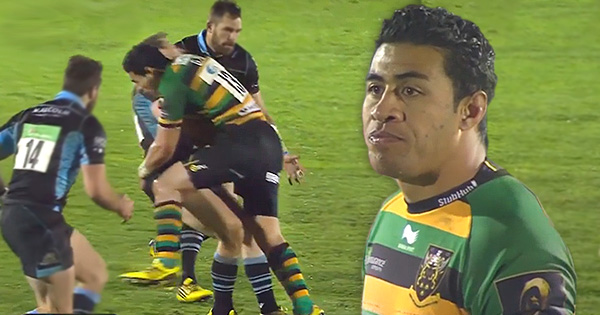 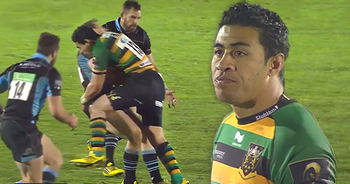 Northampton Saints centre George Pisi is building a reputation as being one of the hardest hitting centres in the game, and he’s done it again, most recently against Glasgow Warriors in the European Champions Cup. It was arguably the biggest tackle of the weekend.

The Samoan launched into Scotland international Mark Bennett, causing some concern for the local fans, leading to referee Pascal Gauzere taking a closer look with the TMO. Gauzere said it was fine, so Pisi stayed on the field and Bennett used the time for a much needed breather.

Pisi has shown on numerous occasions that he reads the game beautifully and loves crash tackling, and this is just another example of a well executed, trademark midfield hit.

Bennett was trying to get the ball on the inside to Sean Lamont, but took his eyes off it with the imminent Samoan threat heading in his direction. Boom.

Pisi recently thumped Owen Farrell, and last year he made a devastating monster hit on Shane Geraghty, causing the London Irish back to be physically sick on the field.

And then there’s poor old Nick Abendanon. Samoan players have a history of brutalising the now Clermont fullback, and when it’s not the Tuilagi brothers going it, Pisi has been on hand to deliver.

In 2011 he made a similar crunching hit on Abendanon, and then in last year’s Challenge Cup Final Pisi got him again, that time with a blindside hit.

Since posting this clip both here and on Instagram, Glasgow Warriors teammate Stuart Hogg found it rather amusing, so Bennett was good humoured enough to respond.

You can view the aforementioned hits in the Related Posts below, and the hit on Farrell on page two