George Smith knocked out by Richard Hibbard on Wallaby return 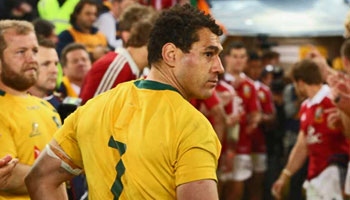 Wallaby legend George Smith has played his final game for his country, but it didn’t go entirely to plan as he was knocked out just minutes into the deciding Test against the Lions. He somehow returned to the field, but was less effective than planned.

Smith, who turns 33 this coming Sunday, made his return to Wallaby colours after a four year absence, last having played Test rugby in 2009 against Wales. It was anything but a fairytale return however, with the Lions thumping the Wallabies 41-16 to take the series.

With the Wallabies missing the services of key man David Pocock, Smith was a surprise selection, replacing up and coming flanker Michael Hooper.

As with the first Test against the Lions, a knockout blow early on affected Robbie Deans’ plans. This time it was Smith who went off after an awful head clash with Hooker Richard Hibbard.

“It obviously affected me. You saw me snake dancing off the field. I passed the (concussion) tests that were required within those five minutes and I got out there.

“But the impact that I envisioned before the game, coming out to do it, didn’t eventuate. That’s my role to disrupt play within that breakdown area. I don’t think I did that well enough,” he said.

Having played rugby in France and Japan, Smith has been with the Brumbies more recently, but his selection drew raised eyebrows. If he hadn’t been knocked out, you can be sure he’d have played a bigger role, but he says it was one of the most disappointing games he’s been a part of.

“I’ve been disappointed with losses, there’s no doubt about that. But because it was such a big game and a big score as well, I’m disappointed.

“I’ve had a great career. I’m very fortunate to have been considered for this series as well. I think it’s time for the young guys and the guys who have been working hard within Australian rugby to have a chance,” added Smith, who will now focus on Super Rugby with the Brumbies.

Coach Robbie Deans, who was sacked earlier this week, heaped praise on Smith for a great career.

“Obviously it’s not the way he would have liked to have finished, but it was tremendous that he could get a send-off in Australia. He’s a great player. He deserves the respect that he’s got.”

Below is a quick look at the knockout blow, and Smith’s courageous return to the field.

Is this Britain's most comprehensive university rugby programme?

A major route into the game back in the amateur era, university rugby is going through a renaissance in England and Ealing Trailfinders are leading the way.