Giant winger Taqele Naiyaravoro slims down, gets signed for Premiership 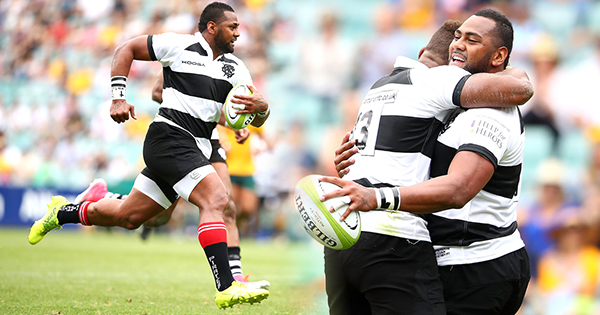 Northampton Saints have today confirmed the signed of former Wallabies and Barbarians winger, Taqele Naiyaravoro from the Waratahs. The giant winger, who has shed some weight of late, will join for the 2018-19 season.

The Fijian-born Australian last year tipped the scales at 136kg’s but with Super Rugby fast approaching, he’s been under a gruelling training regime and has managed to drop 12kg’s, slipping down to 124kg’s, as was evident with his recent appearance at the Brisbane 10s.

According to coach Daryl Gibson, he still has more to lose. Only another three or so.

“Pre-season has been a lot better,” he said. “I’ve never done so much running. I’m really looking forward to the season. It’s a big change for me and I’m happy for it.”

The destructive running 26-year-old has been capped twice by the Wallabies, and played for the Glasgow Warriors during the 2015-16 season, scoring nine tries in 22 appearances.

Naiyaravoro says he cannot wait to have a stint in the Aviva Premiership.

“I’m thrilled to be able to return to the UK and join a massive Club in Northampton Saints,” he said.

“The squad is already filled with talent and I can’t wait to arrive and try to develop further as a player. The Club is heading in a really exciting direction with the likes of Chris Boyd and Dan Biggar arriving next year, and I hope I can be a part of a push for more silverware at Franklin’s Gardens.”

Having witnessed Naiyaravoro’s talents in Super Rugby, Saints technical coaching consultant Alan Gaffney is eager to see the same explosive player next season when he joins the likes of Rob Horne at Saints.

“Taqele Naiyaravoro is an immense talent and we feel that he can really fulfil his sizeable potential at Saints,” he commented.

“He clearly boasts the physical attributes to cause teams a lot of problems in the Aviva Premiership and in Europe – and he showed that during his time with Glasgow.

“Taqele already has a relationship with Rob Horne having played with him at the Waratahs and I’m sure he will make a massive impact when he slots into the back-line next year.”